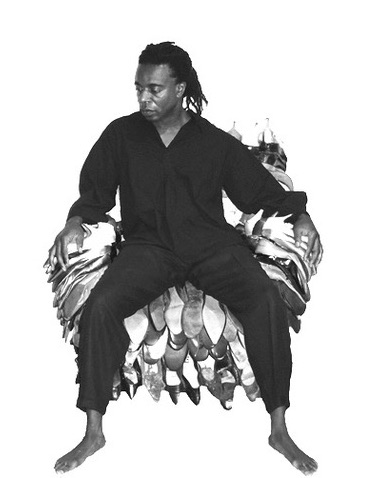 Willie Cole attended the School of Visual Arts in Manhattan. His artistic breakthrough came in the late 1980s during a stay at the Studio Museum in Harlem: “The iron took over”. Today, Cole is known far beyond the borders of New Jersey for his iron pictures and sculptures. Everyday objects have subsequently repeatedly found their way into his work. Special attention is paid to the so-called “High Heels”. Since the early 1990s, Cole has been assembling women’s shoes into carefully designed assemblages, sometimes even having them cast in bronze. The transfer of found, discarded, and sometimes even recycled material runs through his entire oeuvre. The influence of artist colleagues of the older generation, especially the conceptual work of Marcel Duchamp, is obvious. Another constant that characterizes his work is his pronounced interest in African culture.

Accordingly, Cole’s work has been part of large thematic exhibitions, including “Reconfiguring an African Icon: Odes to the Mask by Modern and Contemporary Artists from Three Continents” at the Metropolitan Museum of Art, New York (2011) and “Represent: 200 Years of African American Art” at the Philadelphia Museum of Art (2015). Solo presentations have been shown at the Museum of Modern Art, New York (1998), the Tampa Museum of Art (2004), the Miami Art Museum (2001), the Bronx Museum of the Arts (2001), and the Montclair Art Museum (2006), among others.