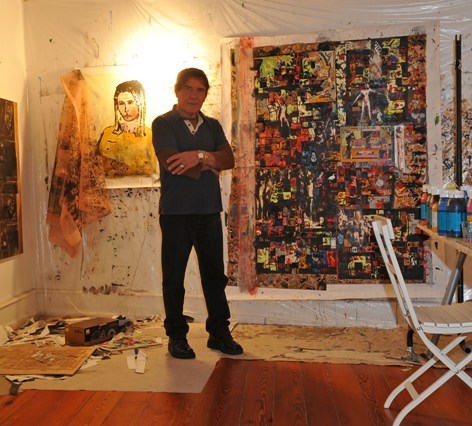 Born in 1939 in the Druze village Daliat-El-Carmel, Israel, Ovadia Alkara came to the Artist Village Ein Hod at the age of seventeen. Here he studied stone carving with the sculptor Rudi Lehmann (1955-1958). In Ein Hod he became familiar with modern art through his acquaintance with well-known Israeli artists and their work. After his military service at the IDF Alkara was employed in the Haifa Theater constructing sets for plays as well as for a theater club in Tel Aviv. In 1962 Alkara arrived in Paris and studied at the Ècole de Beaux Arts (1962-1964). At the same time he was employed as an apprentice in the studio of the artist Yaacov Agam. In 1966 Alkara arrived in New York and soon joined the art scene of the city and exhibited there. Alkara lived and worked alternately in New York and Israel. Since 2007 he lives in Duesseldorf and in Ein Hod, Israel. Alkara had his first one-man show in 1964 in s Haifa. Since then he has exhibited in galleries and museums worldwide. In 1983 he received the Acquisition Prize, Triennale of Graphic Art, Haifa Museum of Art, and in 1994, the Ministry of Science and Arts Prize, Israel. Alkaras works are represented in numerous international public and private collections.